Zimbabwe Airways was set up to avoid debt, former president does not own it – its a government company

He also denied allegations that his in-laws, the former first family were the owners of the airline.

The ownership of Zimbabwe Airlines is still unclear as Minister of Transport Jorum Gumbo has given contrasting statements in the past. END_OF_DOCUMENT_TOKEN_TO_BE_REPLACED The late Morgan Tsvangirai’s sister Miriro Tsvangirai (47) died at home on Friday after being discharged from Parirenyatwa Hospital due to the strike by nurses. Her brother Manasa told The Standard,

She was asthmatic and had heart complications. She was admitted at Parirenyatwa Hospital and we took her home when the government asked people to withdraw their relatives from hospitals following the strike by health workers. END_OF_DOCUMENT_TOKEN_TO_BE_REPLACED

The spokesperson for the Thokozani Khupe breakaway MDC-T party, Obert Gutu has declared that he will never rejoin MDC-T leader Nelson Chamisa.

Gutu and Khupe were expelled from the MDC-T for refusing to recognise Nelson Chamisa’s appointment as MDC-T president.

Photos: Welcome to Gobola Church in South Africa, where members drink during service 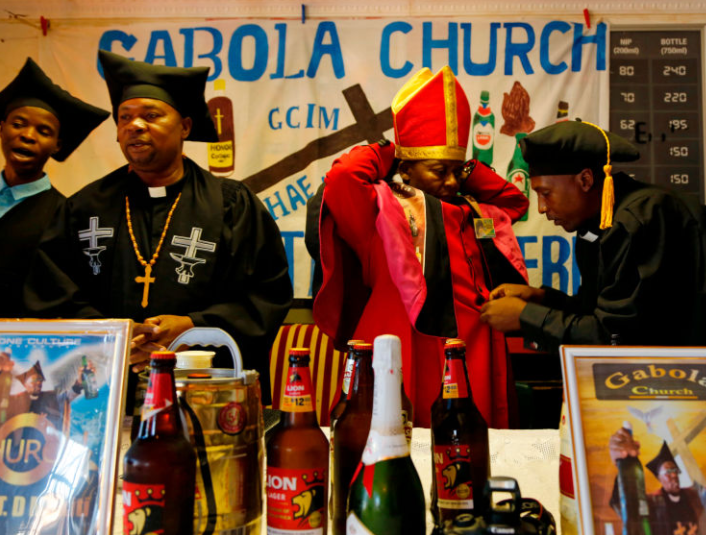 Dressed in a red robe and a gold-trimmed Bishop’s miter, the clergyman pours whiskey into his cupped hand and anoints the forehead of the man sitting before him.

“You are hereby invested as a minister … This is a double tot,” he says of the remaining whiskey in the chalice.

He hands it to the new minister, who downs it. “Hallelujah!” shouts the congregation members who erupt in singing and dancing, swigging from bottles of beer. Welcome to Gabola Church, which celebrates the drinking of alcohol.

The South African church was started eight months ago and found an enthusiastic following almost immediately.

“We are a church for those who have been rejected by other churches because they drink alcohol,” Gabola’s founder and self-declared pope, Tsietsi Makiti, told The Associated Press. 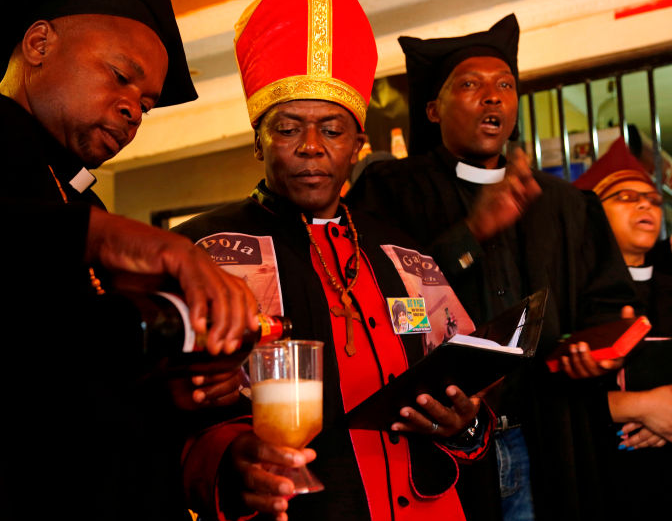 “Gabola Church is established to redeem the people who are rejected, who are regarded as sinners. We drink for deliverance. END_OF_DOCUMENT_TOKEN_TO_BE_REPLACED 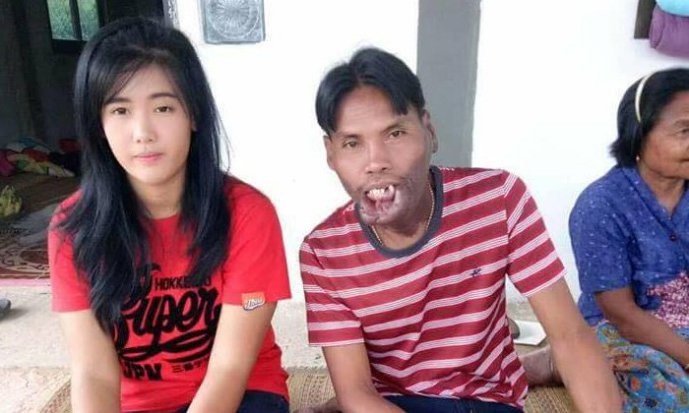 Thai social media was in meltdown as pictures emerged of a man with a birth defect to his mouth and face marrying a beautiful woman. The woman identified as 21-year–old Bunmee is in love regardless of her partner’s facial deformities.

According to reports, no dowry was paid as the man has nothing to offer but his love and devotion. END_OF_DOCUMENT_TOKEN_TO_BE_REPLACED 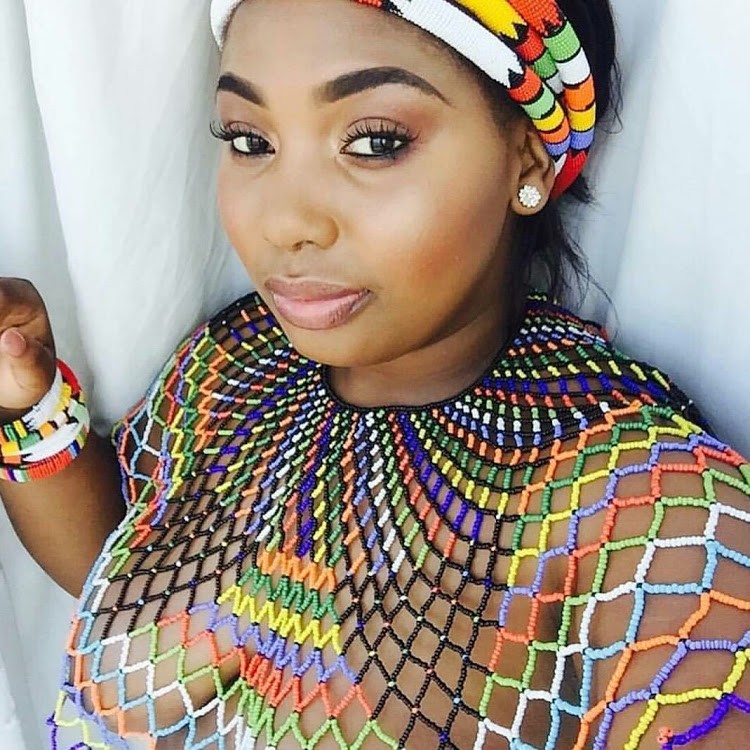 Nonkanyiso Conco confirmed to the Times Live that she and Zuma are getting married.

“Yes‚ we are getting married‚ but that is all I can say. I need to consult before I give any interviews‚” she said 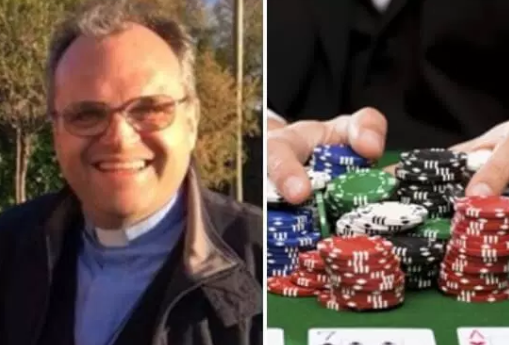 According to Corriere della Sera newspaper, he has negotiated a plea bargain for a suspended two-year jail term for embezzlement.

As part of the deal, he has promised to gradually return the money and signed up for therapy against gambling addiction, with the support of his church superiors. END_OF_DOCUMENT_TOKEN_TO_BE_REPLACED

‘I am a side chick and happy about it’ 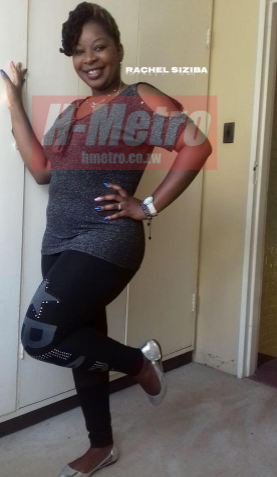 A Zimbabwean lady, Rachel Siziba, 25, has revealed that she is a happy side chic. According to her, she is dating a married man and has no plans of ending the relationship.

Yes it is true I am dating a married man but I entered into the relationship not to separate him with his wife; he puts his family first and I respect that. END_OF_DOCUMENT_TOKEN_TO_BE_REPLACED

Arsene Wenger to leave Arsenal end of this season

Arsenal manager, Arsene Wenger has confirmed that he will be resigning from his position at the end of the season, bringing an end to his 22 years in charge of the club.

Wenger still has one year left on the new contract he signed at the end of last season, but has chosen now as the ‘right time’ to walk away from the Gunners.

“After careful consideration and following discussions with the club, I feel it is the right time for me to step down at the end of the season. END_OF_DOCUMENT_TOKEN_TO_BE_REPLACED

FOUR female students from University of Zimbabwe (UZ) and Zimbabwe Open University (ZOU) found themselves in a sex pyramid with one Confidence Hilary Thomas.

The story came to the public domain via a video that was shot during the incident and has since gone viral on social media networks.

In the video, the four women and a couple of friends were confronting their shared boyfriend, beating him with a whip and fists.